How concrete found its sensual side: the spectacular Paris home designed for showing off art

A rough, concrete structure combining geometric shapes and rows of small rectangular windows reminiscent of a 35mm film reel sits in the heart of Paris’s 16th arrondissement. The design would seem to be a nod to the architecture of a nearby house by Le Corbusier, but its owner, Brigitte Lecêtre, rejects the comparison.

“You call this a Brutalist house?” says the retired events organiser and co-founder of the Art Paris fair. “I call it poetry.”

The seven-bedroom home she designed 20 years ago with her friend, the Italian architect Stefania Stera, is purposely stylistically atemporal. On the market for €26m (more information here), it is an unexpected blend of geometric Modernist forms and classical Italian style. The story of Lecêtre’s “maison à quatre mains” (a four-handed creation), which took four years to build, began in 1996, when she and Stera obtained permission to demolish a 1960s house located between Jasmin Metro station and the Bois de Boulogne in western Paris.

Stera drew up plans for the 1,400 sq m property progressively, taking in Lecêtre’s ideas as they traveled through Italy together, visiting palazzi in Venice and Rome that year. Their trip influenced the property’s interiors: 14 bespoke frescoes, by the Italian artist Marco Tirelli, flow from the living room to the upstairs corridors and study. The turquoise and ochre tones recall classical Italian murals, while displaying contemporary, abstract shapes.

The concrete flooring in the living room, dining room, kitchen and study borrows from Italian terrazzo — a composite material made from small pieces of stone — with the Parisian builders recreating the effect with marble and cement. The furniture is finished in gold leaf. 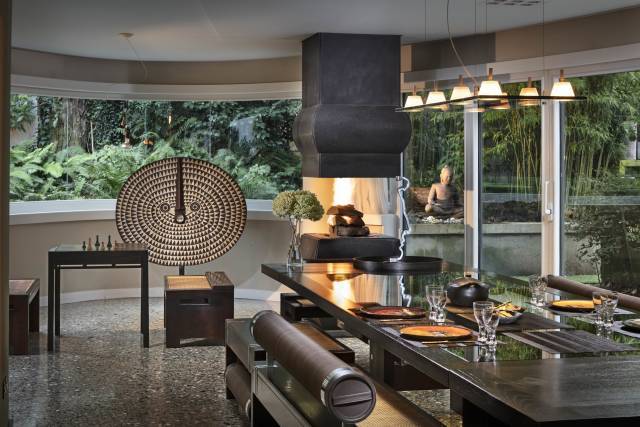 The dining room, where architect Stefania Stera created folding benches that can be adapted to accommodate more guests as needed

Originally from Rome, Stera moved to Paris aged 20 to study at the École Nationale Supérieure d'Architecture de Paris-Belleville. One of her first assignments was a photo reportage on the Maison La Roche, a 1920s house designed by Le Corbusier and sited just 190m from Lecêtre’s home.

Stera intended for her design to enter into a dialogue with both the Le Corbusier house and a Modernist villa by another influential French architect, Robert Mallet-Stevens, around the corner. However Lecêtre sees her curved concrete home as far surpassing both in terms of style and finish, comparing it to the body of a woman: “sensual but strong”. The bedrooms upstairs each have access to a different-sized terrace

Stera says the house suits the private exhibition of art, with the openness of its spaces recalling Le Corbusier’s concept of promenade architecturale, according to which the structure of the layout invites movement from one room to the next. Even the rectangular windows of the upstairs bedrooms and study, created like a film reel to frame the view of the garden, create a sense of continuity. Made from marble and cement, the study flooring aims to replicate terrazzo floors found in Italian palaces

The idea was also to build a functional home that would work as well for family living as for entertaining. “We wanted space for dancing, space for hosting dinners that do not feel lonely if there’s only two of us at the table,” says Lecêtre, who shares the house with her husband Patrick.

In order to avoid the vision of an empty dining room, Stera created folding benches that can be adapted to accommodate more guests as needed. Upstairs, folding walls reveal surprises too: a hidden door behind the mirror in the master bedroom leads to a secret exit. In another bedroom, a wardrobe opens on to the en-suite bathroom.

Now retired, the couple are selling the house because they spend most of their time at their new home in Sardinia, also created by Stera. However, the sale might be a lengthy process. Lecêtre is protective of her creation: “I had an offer from someone who wanted to tear down the kitchen to expand the swimming pool,” she says. “I said, ‘No, thanks.’”