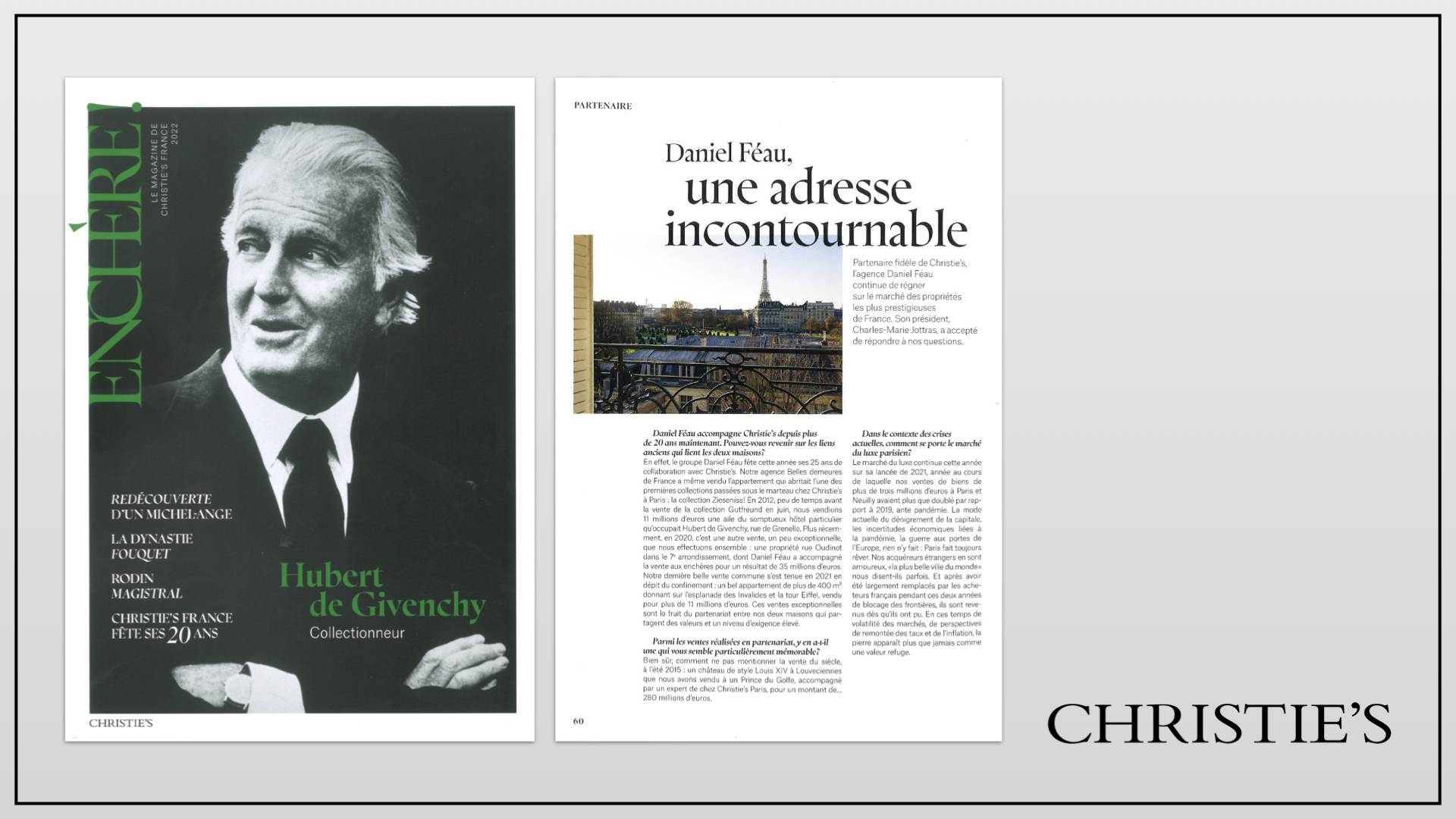 A trusted partner of Christie's for over two decades, the Daniel Féau network continues to reign supreme in the luxury real estate market in France. The group’s CEO, Charles-Marie Jottras, has kindly agreed to answer our questions.

Daniel Féau has now been associated with Christie's for over two decades. Could you take us back to the early days?
Effectively, the Daniel Féau group celebrates this year its 25 years of collaboration with Christie's. Our Belles demeures de France agency actually sold the apartment in which the Zieseniss collection, one of the first to go under the Christie’s hammer in Paris, was sold! In 2012, shortly before the sale of the Gutfreund collection in June, we sold a wing of a sumptuous private mansion in the capital’s rue de Grenelle, home to Hubert de Givenchy, for 11 millions euro. More recently, in 2020, together we marketed an exceptional property in the 7th District’s rue Oudinot, which sold for no less than 35 million euro. Our most remarkable recent joint sale was in 2021 during lockdown, with the sale for in excess of 11 million euro of a sublime over 400 sqm apartment commanding superb views of the Esplanade des Invalides and the Eiffel Tower. These truly exceptional sales are the fruit of a partnership between two companies that share the same core values ​​and the same commitment to excellence.

Among the sales Féau and Christie’s have achieved together, is there one that stands out?
Naturally, it would be hard not to mention the sale of the century…during the summer of 2015, working with an expert from Christie’s, we sold a Louis XIV-style chateau in Louveciennes to a Gulf Prince for …  280 million euro.

In the context of today’s crises, how is the Parisian luxury real estate market doing?
This year, the surge in activity in the luxury market that we witnessed in 2021, the year before the Covid-19 pandemic during which our sales of assets priced at over three million euro in Paris and Neuilly more than doubled when compared to 2019, is not waning. Despite a fad to knock the capital, economic uncertainty linked to the pandemic and war at the gates of Europe, nothing has changed: Paris remains a dream destination. Our foreign buyers are in love with “the most beautiful city in the world” as they sometimes call it. Largely replaced by French buyers over the past two years while travel restrictions were in place, they are now coming back as soon as they can. In these times of instability, with the prospect of higher interest rates and inflation on the cards, real estate is seen, more than ever, as a safe haven.