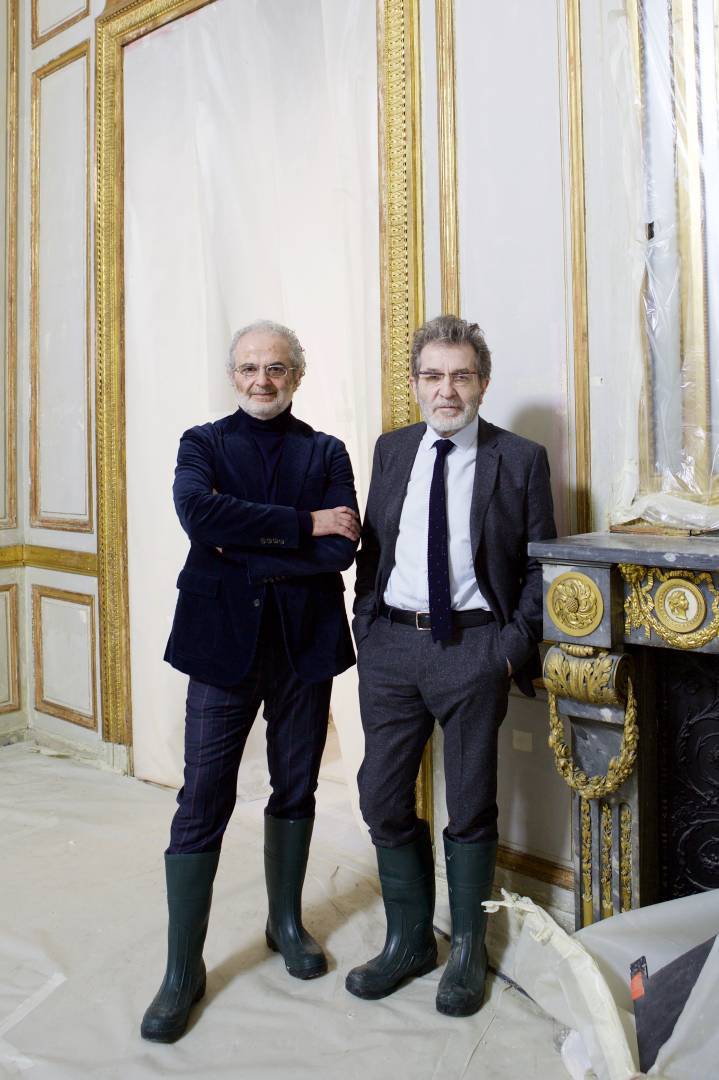 From Place de la Concorde to the Auvergne via the Marais, these decorators undertake projects in which history is the major player. By Eric Jansen

For many years they worked in the utmost discretion with only a privileged few knowing where to actually find them. In 2000, Joseph Achkar and Michel Charrière embarked upon on a colossal project: reviving the historic Hôtel de Gesvres which had become a bank’s head office... Today, the seventeenth century building seems to have survived the passing of time totally unblemished. Parquet flooring, mouldings, fireplaces, furnishings, paintings… nothing is missing and yet almost all have been reconstructed. “We must be in total harmony with where we are, for the contents must fit the container,” says Joseph Achkar who with his partner has also renovated a magnificent palace in Jubayl, known historically as Byblos. Despite being somewhat out of sync with current trends, the duo remains totally committed to their style. Today, contemporary style reigns supreme and references to the past are rarely tolerated unless they are associated with a certain eclecticism... Joseph Achkar and Michel Charrière don’t care in the slightest if they are considered unfashionable. If proof were needed, take a look at their new case of love at first time: Ravel Castle in Auvergne. This 13th century fortress had over the years been transformed into a refined residence, but when they acquired it in 2014, “the boat was sinking”. They undertook the colossal project to save it. “A lifework.”

Don’t be fooled into thinking that they are alone in believing in their daunting, some may even say crazy, projects which lie somewhere between philanthropy and aesthetic dream. Philippe Bélaval, president of the “Centre des monuments nationaux” has entrusted them with the restoration of the Hôtel de la Marine, a renowned and iconic building located at Place de la Concorde. An immense and exhilarating project, for the site covers some 12,000 square metres. “Since the eighteenth century the building’s rooms have been occupied by Naval staff, and they have remained practically in their original state. The decor is intact, although it has over the years been repainted a dozen or so times. We have renovated the original colours and are now trying to find the furnishings that were once there.” A rigor that has also convinced designer Hervé van der Straeten, somewhat surprisingly considering the latter’s contemporary creative style. With his friend Bruno Frisoni he has acquired an extensive apartment in a private mansion located in the Marais, and in order to undertake its restoration they have called upon Joseph Achkar and Michel Charrière. “The living space had been completely transformed, there was a kitchen in the middle of the main room… in short it was a massacre.” The decorators got to work, discovered a seventeenth century painted ceiling and recreated the apartment’s partition walls. “We told Hervé and Bruno that we would restore the property by the book, and that they could then add modern comfort.” A project that was approved by all concerned. The duo had just completed their work when a new project took them to Morocco. A couple of Swiss collectors asked them to create the “Musée des Arts de la Parure” in Marrakesh, but this time the building was to be totally new. A challenge? “Not at all, we are also contemporary but are less well known for it. We once had a client who wanted a Louis XVI style in a tower in Beirut… we explained that it was not possible and created a modern decor. As we always say: beauty is not all exclusive, it has to be right.”